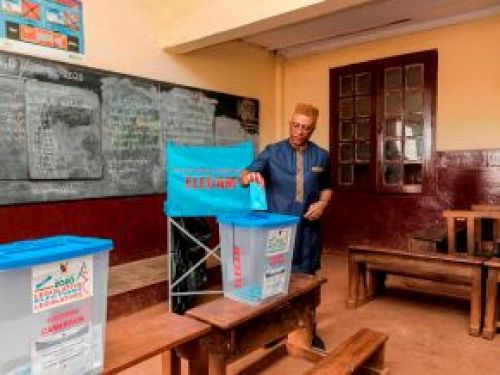 Maurice Kamto and Cabral Libii clash over the electoral reform

The opposition is once again clashing over the reform of the electoral code. Via tweets, Cabral Libii of the Cameroon Party for National Reconciliation (PCRN), and Maurice Kamto of the Movement for the Renaissance of Cameroon (MRC) started a new row over the issue.

It all started with a tweet from Maurice Kamto on May 23.  "We will not accept (...) new elections (...) without a consensual reform of the electoral system. Cameroonians should be allowed to choose their legitimate leaders, freely and in democratic transparency," he wrote.

"I insist! The electoral code is not a panacea," Cabral Libii tweeted to mark his disagreement with Maurice Kamto. The PCRN believes that despite the importance of the electoral reform, it is just a “tool” in the quest for alternation.

"The active, palpable involvement and effective participation of citizens are fundamental and essential to monitor alternation in our country. I am perfectly aware of the approaches, which, in good or bad faith, favour the modification of the electoral code in our democratic system," says Cabral Libii.

For Cabral Libii, the best choice is to get voters to register for cards. It is no use making ineffective moves by publishing "all day long original ideas to change governance," he adds. To back up his criticism, he indicates that boycott has recently shown its limits in Côte d'Ivoire.

“So far, the watchword in the Ivorian Popular Front (FPI) has been ‘boycott’ unless Gbagbo is released. However, for three days now, they have started effective actions by calling voters to massively register for the voters’ ID. The key is the participation of the people,"  Cabral Libii asserted.

The counter-attack to this thinking is led by Armand Noutack, an MRC militant and defector of the movement "11 Million Citizens" founded by Cabral Libii to encourage Cameroonians to register on the electoral register on the eve of the 2018 presidential election.

"We were together on the ground to sensitize Cameroonians to participate in the voter registration, it was a total failure given the figures published by Elecam," he wrote.

According to him, Cameroonians want to vote but "many of them hate wasting their precious time to participate in elections whose results are known in advance! Had the electoral code been changed in 2016, you wouldn't even need to create 11 million registrants, because Cameroonians would massively register themselves," he added.

The debate between the PCRN and the MRC shows the leadership battle within the Cameroonian opposition since the 2018 presidential election won by Paul Biya (71.28%). Ranked 2nd with 14.23% of the votes, Maurice Kamto became the leader of the opposition ahead of Cabral Libii who obtained 6.28% of the votes.

However, many people contested the legitimacy of the MRC in the opposition since Maurice Kamto “defied the institutions” by boycotting the legislative and municipal elections of February 9.

Because of the boycott, the PCRN now has 5 deputies in the National Assembly positioning itself as the real leader of the opposition.

Let’s note that Cabral Libii’s party is not against a reform of the electoral code but, it is against the PCRN taking the lead in that endeavour.

"The PCRN is waiting for parties to state their respective approaches and is willing to join any mutualized initiative which should lead to a consensus around a proposal for this reform of the electoral code,” Cabral Libii writes. He then explains that as far as the institutional processes are concerned, his party will submit that proposal to the national assembly.