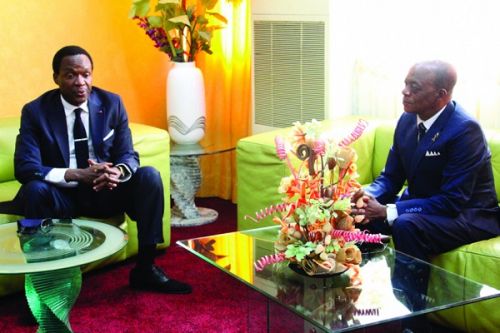 Cameroon’s defense minister, Joseph Beti Assomo, and his E. Guinean counterpart are holding a two-day meeting in Yaoundé, starting today June 29, to discuss the border dispute between their countries. The consultation meeting was instructed by the Heads of State of the two countries.

The meeting also includes a closed-door meeting of experts, a closed-door meeting of the Chiefs of Defense Staff of the two countries before the dialog between the two Defense Ministers. It will “focus on the modalities of collaboration and joint security actions at the border between the two countries,” according to an official statement by Cameroon’s defense ministry. Led by its Defense Minister, Leandro Bekale Nkogo, the Equatorial Guinean delegation arrived in Yaoundé on Sunday 28 June.

Let’s recall that in 2019, Equatorial Guinea unilaterally launched the construction of a wall at the border with Cameroon and the Cameroonian ministry of territorial administration warned of the violation of “the territorial integrity of Cameroon.” But contrary to the promise made in Yaoundé to stop this work, the E Guinean government later initiated the construction of three watchtowers along the border. “The construction of these watchtowers does not take into account the line of the border. As if the Equatorial Guinean authorities wanted to provoke an incident with our country,” a source said.

“Equatorial Guinea is not only building on the border between the two countries. Also, its army regularly makes incursions into our territory. All these incidents have prompted the Cameroonian authorities to reinforce our military presence along the route of this infrastructure,” the source added.