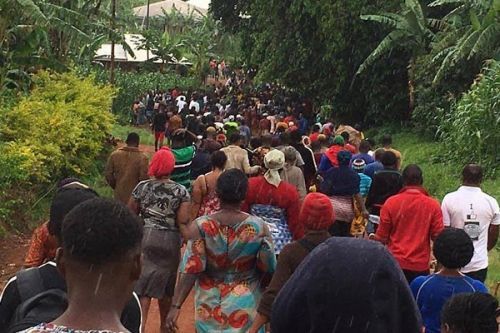 Today May 31, 2021, some residents of Mbefi, a district in Bamenda III (Northwest region), held a protest against the exactions of separatist militias. Their protest was organized on the sidelines of the burial of one of their relatives who was shot dead by the secessionists they are denouncing.

According to local sources, the relative whose burial sparked the protest was killed days earlier after he publicly criticized separatists.

Let’s note that separatist fighters are regularly accused of exactions in the Anglophone regions. For instance, in Bamenda, sources claim that they wounded (and possibly killed) at least three people who were resisting an attempted kidnapping. Also, in March 2021, Human Rights Watch (HRW) wrote a dispatch titled “Armed Separatists’ Abuse Rife in Cameroon’s Anglophone Regions.” “Since 2017, armed separatists have kidnapped hundreds of people, including students, clergy, political leaders, and humanitarian workers, while calling for the Anglophone regions to separate. The separatists have enforced a boycott of education in the English-speaking regions to protest against what they perceive as the assimilation of the Anglophone education system into the central, French-speaking one,” Human Rights Watch wrote.

The Anglophone crisis began as corporatist demands from lawyers and teachers in the Southwest and Northwest. However, it quickly became an armed conflict between security and defense forces and armed militia. The separatists have continued their attacks even though the demands formulated by the lawyers and teachers were already met and a national dialogue was also organized (in 2019 in Yaoundé) to find a solution to the crisis. According to estimates of international organizations, the conflict has claimed close to 6,000 lives.