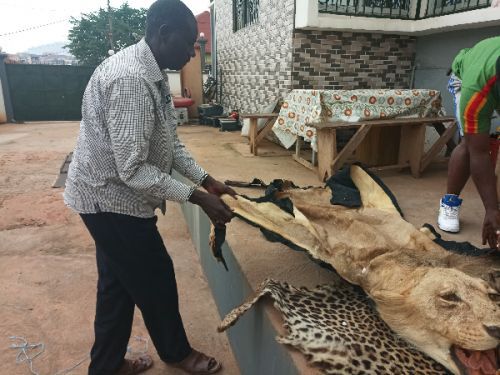 On March 25, 2021, two alleged wildlife traffickers will appear before the Court of First Instance of Yaoundé. They were arrested on August 6, 2020, with two animal hides (a lion and a panther’s). One of the suspects is a retired high school teacher who, according to sources close to the case, gave the two hides to her accomplice.

Also, on November 26, 2020, the court of first instance of Ndokoti (Douala) sentenced three ivory traffickers to one year in prison and a XAF200,000 fine each. They were convicted of "illegal ivory points possession and trafficking." Indeed, they were arrested in May 2020, in Douala, with 26 kilograms of ivory points they were planning to export.

Meanwhile, in the southern region, a man appeared before the court of first instance of Ambam for trying to export 626 kilograms of ivory. Also, since October 6, 2020, five people involved in pangolin scales trafficking are being tried at the court of appeal of Bertoua, in the eastern region.

All these arrests and trials fall within the framework of a government program aimed at stopping protected wildlife species trafficking.

Indeed, in 2003, the Ministry of Forestry and Wildlife (Minfof) launched an effective wildlife law enforcement program to "track down and prosecute wildlife law violators". The seizures and arrests carried out in recent years fall within the framework of this government program.

According to Cameroonian law, "any person found in possession of all or part of a protected species is considered to have killed or captured" that animal and is liable to up to 3-year imprisonment and/or up-to a XAF10 million fine.

The Minfof generally relies on the police, gendarmerie, customs, and NGOs such as The Last Great Ape (LAGA) that support the government in wildlife law enforcement, and also assists in legal proceedings.

Most of the people arrested under the program are either traffickers considered to be the main actors of the illegal trade in wildlife products or poachers whose main task is to hunt animals that are then sold to traffickers coming from urban areas, we learn.

Truly, it is sometimes difficult to arrest the increasingly organized traffickers. But authorities are determined to stop the trafficking of species protected by the Convention on International Trade in Endangered Species of Wild Fauna and Flora (CITES), to which Cameroon is a signatory.