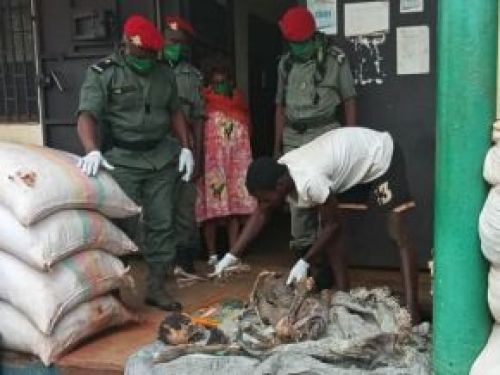 While we think police successfully put an end to this loathsome activity in the Noun region, human bone trafficking operations continue in this part of Cameroon. Sources said three people were arrested on May 20 by gendarmes with a full human skeleton and dried flesh and hair.

These human body parts are reportedly those of a lady who died 6 months ago and whose corpse was dug out in a locality located some 35 km from Foumbot, where she was buried. The traffickers were trying to sell the bones for CFA30 million when they got stopped by the gendarmes. The investigation that led to the arrest was conducted by the gendarmerie brigade of Foumbot with help from Laga, an NGO specialized in wildlife law enforcement.

“We were investigating illegal wildlife trafficking in the region when we came across these traffickers,” an NGO member said. Gendarmes later found that the human bones were stored in the house of a lady in Baigom. She was also arrested.

A thorough investigation into the case revealed that “they (the traffickers) belong to a human trafficking network and one of them was a former wildlife trafficker who turned into a human bone trafficker. They have partners in Gabon.”

In January of this year, 4 traffickers were arrested in the Koutaba region. They dug up a corpse and sold it for CFA10 million. The human bones are said to be used in mystical rituals and traditional medicine.