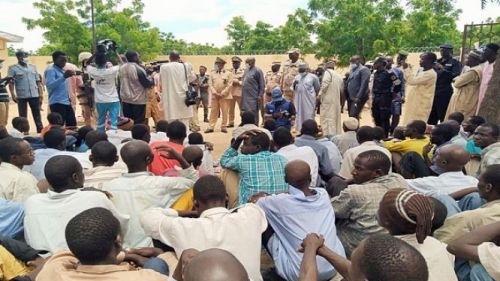 Cameroon to repatriate over 1,000 former Boko haram fighters and families to Nigeria

Cameroon will soon repatriate over 1,000 Nigerian Boko Haram fighters and families who were lodged in the Mora and Meri disarmament, demobilization, and reintegration centers since their surrenders. In that regard, on Wednesday, August 1, Cameroonian and Nigerian authorities held a working session in Maroua to discuss the repatriation conditions.

The Cameroonian delegation was led by the governor of the Far North, Midjiyawa Bakari, while the deputy governor of Borno State, Umar Usman Kadafur, headed the Nigerian delegation. "In the coming days, the process initiated on September 1, will allow the 1,039 Nigerians that Cameroonian authorities are brilliantly supervising to return home," said the Nigerian representative.

"We are going to identify them[ the former fighters and their fmilies] (…) and see how we can take them home," Midjiyawa Bakari said on Crtv-radio.

The announcement comes just days after 268 former Boko Haram fighters and their families returned home on August 29. The operation was aimed at allowing demobilization centers that have seen a huge influx of former fighters to welcome and lodge more incomers.

To face this situation, the government is currently planning to build multifunctional centers. In Mémé (not far from Mora), it was supposed to launch the construction of a XAF1 billion center in January 2021 (according to an announcement made last year by Francis Faï Yengo, national coordinator of the disarmament committee). This new center will host 1,000 people, provide adequate learning environment and training workshops to the former fighters.