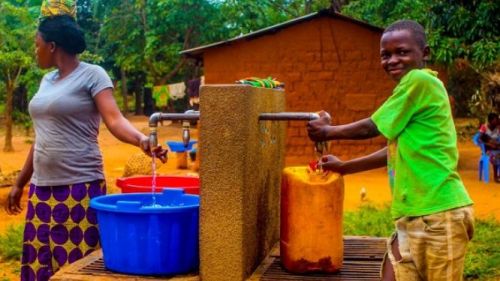 South Korea agreed to inject CFA100 million into water supply projects in Cameroon. A financing deal was signed in that regard last August 31 between the Minister of Economy (Minepat) and the South Korean ambassador.

According to available information, the projects consist of the construction of solar-powered systems to bring clean water to people living in the localities of Ngali II, Edzendouan, Lobo, and Ebogo in the central region. In detail, each locality will have a 10,000 m3 water tower connected to three standpipes with two taps each and an extension of up to 300 m. The systems will supply 2,000 people. The project is scheduled to be completed in one year, including six months for the works and six months for the guarantee.

“The advantage with these infrastructures is that they do not need electricity to operate, making their use easy for households,” said Jonghan Kim, the S. Korean envoy. For his part, the Cameroonian minister, Alamine Ousmane Mey, stated that “this donation from the Korean government is an expression of friendship, trust, and commitment to the development of our country, both at the decentralized and central levels”.

Making drinking water accessible to the rural population has always been a priority for the government. In the three-year emergency plan for accelerating growth from 2015 to 2017, authorities initially planned to build 900 boreholes and 19 drinking water systems throughout the country to serve 210,000 people. The second phase focused on the construction of 3,000 boreholes in the north region.