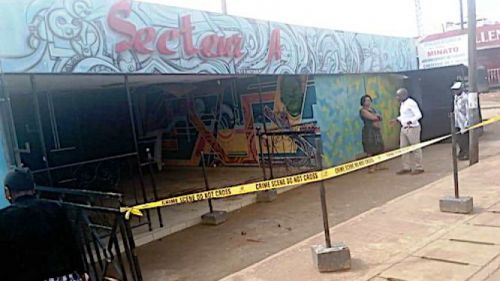 At least five injured in a homemade bomb explosion in a bar in Nsam, Yaoundé

An explosion of a homemade bomb in a crowded bar in the Nsam neighborhood in Yaoundé, on Sunday, November 1 at about 8 pm, injured at least five people, security sources reported.

"They are all women. Two were rushed to a health center not far from the place where the explosion occurred, two others to the district hospital of Efoulan and the fifth was recovered by her family," said sources at the central police station No. 3 where an investigation was opened.

The explosive, made from a battery, was placed under a table, we learn. "A young man came into the bar with a backpack that looked quite heavy, which caught the attention of people on the premises. He sat down and ordered a drink. He then left, leaving the bag under the table," explains a police officer who requested anonymity. "In the current context, we generally advise checking people at the entrance of busy places. The young man in question was not checked," he says.

Images of the incident were shared on social networks. "We heard the explosion at around 8 pm so we rushed out of the house without really knowing what was happening. Once outside, we saw a lot of smoke and took shelter on the other side of the road. We stayed there at least until midnight," says a woman, whose house is right next to the bar. "It was a big explosion which lifted the sheets," says Marie-Thérèse Atangana, the landlady.

The explosion blew away part of the roof and unhooked metal plates from the ceiling, also making a hole in the wall. A security cordon was put around the premises. "For the moment, we cannot say if it is the secessionists, because the mine-clearers are still working on the device. It might also be an act of sabotage,” the police officer said.

The owner of the bar reportedly told the police that he had received threats. Residents have said that some people in the surrounding area are not happy with the "success" of his business. The explosion is the fifth in Yaoundé since June. On August 14, the explosion of an improvised explosive device (IED) in a bar in the Mokolo neighborhood caused injuries and material damage.