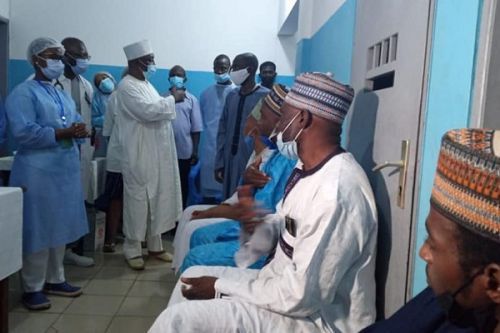 The General Coordinator of the Council of Imams and Muslim Dignitaries of Cameroon (Cidimuc), Moussa Oumarou, urged yesterday, all Muslims to accept to be vaccinated against Covid-19. "Given the health insecurity, we ask all Imams throughout Cameroon not only to get the vaccine themselves but also to raise awareness among the Islamic community," the religious leader said on the government television CRTV.

The coordinator made the call after publicly receiving his first dose of the Chinese Sinopharm vaccine at the Djoungolo hospital in Yaoundé. Since the beginning of the pandemic, he has called for strict compliance with the restrictive measures enacted by the government.

In an awareness-raising video broadcast in French, English, Hausa, and Fulfulde, Cidimuc reminds us of these measures, such as "regular hand washing or use of disinfectant gel," "respect for social distancing and proper mask-wearing."

Cameroon launched its vaccination campaign on April 12. As of the 26 of May, 66,618 doses have been administered, according to official data. The campaign targets 5 million people by the end of the year. On May 21, the government announced the extension of vaccination to people 18 years and older.