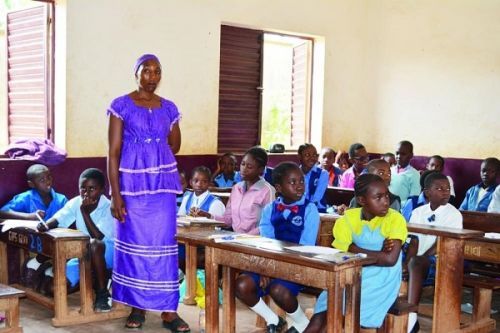 The Cameroonian government continues to take action to improve the national education system. However, it still faces many challenges mainly related to teacher management, poor quality of education, and equitable access to school, particularly in areas affected by conflict and crisis.

The 2022 national school map revealed that Cameroon has more than 14,000 public schools and nearly 8,000 private primary schools, for a total of more than 22,000 schools. This represents an increase of 3,423 in four years. Official data show that there were 18,577 nursery and primary schools in the country in 2018. As for secondary education (general and technical), Cameroon had 3,273 schools in 2021, of which 2,153 were public.

Data also revealed that in 2022, there were 93,773 teachers in public secondary schools and 90,845 in the public basic education sector. "This means that the growing investment in school infrastructure and human resources is aimed at meeting as much as possible the growing demand for national schooling," said the Minister of Communication (Mincom), Rene Emmanuel Sadi. He was speaking last August 30 about the 2022-2023 school year, which begins on September 5.

In Cameroon, there is an average of one qualified teacher for every 51 students in primary schools, according to the Ministry of Basic Education (Minedub). The UNESCO standard is 40 students per teacher.

A situation worsened by the Covid-19 pandemic

To address this problem, Cameroon decided in 2019 to recruit 12,000 primary school teachers. The initiative was supposed to close the teacher deficit but eventually raised another concern: the inequitable distribution of teachers. Unicef said in a recent report that “unqualified teachers are sent to work in rural areas while qualified teachers remain in urban areas, resulting in significant disparities in class size, school conditions, and learning outcomes, to the detriment of students in rural/suburban schools and marginalized communities.”

The advent of the Covid-19 pandemic did not help in any way. Schools were closed, which worsened the poor quality of education in the country and the learning poverty. Learning poverty is defined as the percentage of children who cannot read or understand a simple text by age 10. In Cameroon, the rate is estimated at 80%, a World Bank report released on June 23, 2022 revealed. The document also reported that 70% of children in this age group in low- and middle-income countries are unable to read or write a simple text.

Cameroon has made significant progress toward universal primary education, defined by the UN as the completion of primary school. The gross enrollment rate in primary school is 105.8%, according to data from the 3rd Population and Housing Census. However, the net enrollment rate in primary school is 75.5% and 30.8% in secondary education, according to the same source. These rates highlight the difficulty of providing all school-age children with basic education. According to national statistics, for every 100 children between the ages of 6 and 14, 75 are in school, 11 have been to school but are no longer attending, and 14 have never been in a classroom.

In addition, enrollment rates are lower in rural areas than in urban areas and girls attend school less than boys. In 2020, the secondary school enrollment rate for girls was estimated at 43%. The government hopes to raise it to 47.9% by 2025.

Another problem facing the education system in Cameroon is poor investments. It is estimated that education spending accounted for just over 11% of the government's current expenditure this year. "Regarding budgetary allocations for FY2022, before the overall state budget was revised upwards, CFA643.9 billion were allocated to the basic and secondary education sectors, out of a total state budget of CFA5,752.4 billion. This is 11.19% of the budget for the two sectors,” said the Minister of Communication (Mincom), Rene Emmanuel Sadi.

The Global Partnership for Education (GPE) suggests that 15 to 20% of public spending be directed to education and 4 to 6% of GDP. The GPE recognizes that while external aid can go a long way toward filling funding gaps, the sustainability of education systems and outcomes depends on national efforts to finance education and ensure sound public financial management systems. To this end, Cameroonian authorities are called upon to make more efforts to achieve Sustainable Development Goal 4 (SDG 4), which aims to ensure inclusive and equitable quality education and promote lifelong learning opportunities for all.