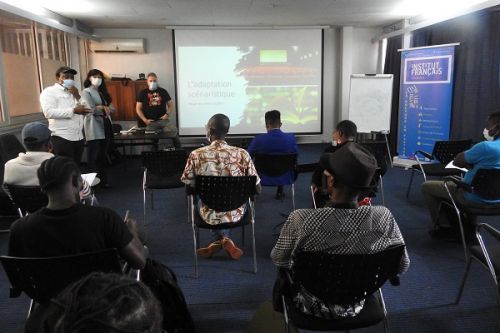 From April 19 to 23, 2021, at the French Institute of Cameroon, French screenwriter Laurent Guillaume and Cameroonian film director Jean Pierre Bekolo led a workshop to discuss the adaptation of Cameroonian novels into films. During the workshop, Laurent Guillaumes who knows the African continent very well and has worked on several series broadcasted on Canal+ explained the basic adaptation technics.

The screenwriter explained that most of the films are adapted from existing novels. “Popular TV series, films, and even superhero films are either adapted from a novel or comic books. Part of them is based on the written materials and the other parts are adapted. That is how most of the current cinematographic projects are realized now,” he said.

In an interview granted, on May 3, 2021, to newspaperRepères, Jean Pierre Bekolo said he believes that the adaptations will help raise the quality of Cameroonian films. At the onset, the Cameroonian film director was critical of the state of Cameroonian cinema. “ The quality of Cameroonian films is really low. I am not the only one to say that. Everyone says it. We are evolving in an environment marked by film illiteracy. The film actors cannot read or write, yet, they are actors. And we are adopting this as our model (...) If 80% of the films produced in Hollywood and even in Europe are adapted from novels, why can’t we adapt the novels and authors that discuss our daily lives instead of relying on made-up stories in which we sometimes can’t detect an inch of inspiration,” he added.

The film producer informs that for a start, they will adapt the novels published by Ifrikiya.  “ We want to ensure that by the time filmmakers start adapting the novels of other editors, we will be able to pay copyright fees. That is why we don’t want to adapt the novels published by editors whose copyright fees are high,” he explained adding that he and Laurent Guillaume will collaborate to get professional and sellable scenarios adapted from Cameroonian novels.