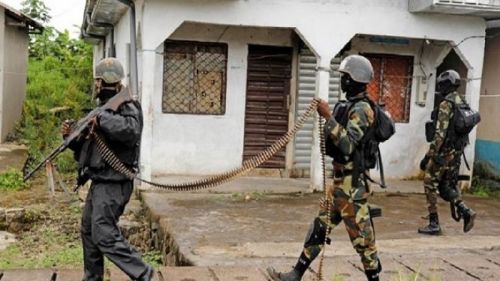 Fifteen separatists were "neutralized" during a five-day military offensive last week in the northwestern region, public radio CRTV reported on Friday, May 1, 2020. The operation took place in Bafut, a commune in the Mezam department about 20 kilometres from Bamenda, the regional capital, and stronghold of the English-speaking crisis.

The booty was presented to the commander of the 5th Joint Military Region, Brigadier General Valère Nka who visited the destroyed bases and conveyed the congratulations of the Minister of Defense (Mindef), Joseph Beti Assomo, to the 300 soldiers who took part in the operations, CRTV said.

He also reiterated the determination of the Cameroonian army to "clean up" the town of Bafut, which has become the stronghold of separatist fighters in recent months.

Bafut must be completely cleaned up. We cannot accept having infrastructures such as the airport here and live with the Ambazonians (the name given to the separatists claiming to be from the ghost state of Ambazonia) all around," General Valère Nka told CRTV.

In mid-March, he had declared that the army would "continue to work for peace to return to the North-West and South-West regions," where the crisis has been raging since the end of October 2016.