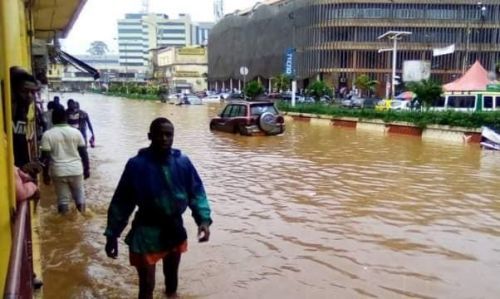 Joseph Armaté Amougou, MD of the National Observatory on Climate Change (Onacc) warns against the risks of flooding in Yaoundé. He said heavy rains are still expected in the city.

As a reminder, a girl died on June 30 in the capital due to torrential rains. Another is missing. On Thursday, for example, the level of water rose very quickly, causing flooding in parts of the city, particularly at the Voirie municipale and Avenue Kennedy. The water came out of the Mingoa and Djoungolo river beds, which respectively cross these two places, and invaded the streets.

“When the water flows from the Municipal Lake, it enters the Mfoundi canal built under the first phase of the Yaoundé Sanitation Project (PADY). So, when the water level rises at the level of the Mfoundi, the waters of the Mingoa River can no longer enter and they gradually rise, leave their bed, and cause what you have observed," explains Gérard Essi Ntoumba, coordinator of PADY II.

Despite the "satisfactory results" obtained in reducing flooding in Yaoundé following the construction of 17 km of canals on the rivers that drain the city during Pady 1 and 2, some areas are still exposed to flooding, both in the downtown and the outskirts.

In December 2021, the African Development Bank (AfDB) granted a loan of $38.55 million to finance the Yaoundé Complementary Sustainable Sanitation Project (Pcady). This project, set to last 48 months, is a continuation of Pady 1 and 2. It aims to "significantly reduce" the frequency of flooding in the capital in the context of climate change while making the necessary adjustments to increase the expected results. Authorities plan, as part of this project, to rebuild the gutter located in front of the Municipal Roads (Avenue Charles Atangana) connecting the Mingoa River channel to the Mfoundi.