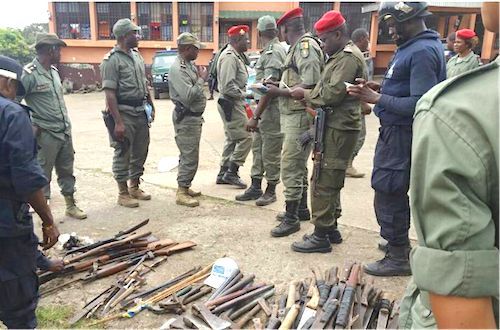 During a raid as part of the fight against various illegal activities on Tuesday, November 3, the administrative authorities of the city of Douala discovered an illegal factory manufacturing handmade firearms in the Bonabéri neighborhood. They discovered metal tubes, an electric saw, forging equipment, and an electric power device.

According to the public media Cameroon Tribune, two suspects were arrested. One of them, the welder, reportedly denounced his alleged accomplice after his arrest. The discovery of this illegal artisanal arms factory was possible thanks to information received upstream, according to the same source.

On October 13, elements of the Moungo gendarmerie company had discovered an artisanal firearms factory in Nkongsamba, the capital of the Littoral department. Several weapons in the process of being manufactured had been seized and the owner of the premises, a convicted criminal, was arrested. Initial investigations revealed that he had been regularly supplying firearms to clients in the northwest and southwest regions, which have been plagued by the Anglophone crisis since October 2016. This discovery comes against a backdrop of increased attacks on schools by armed groups in these two regions of the country.