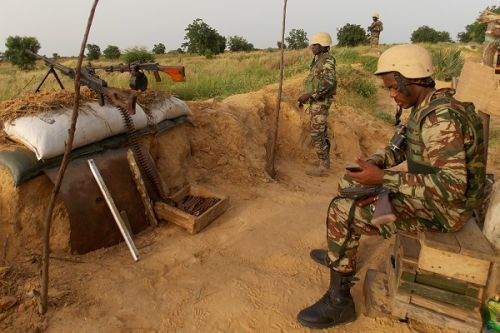 Two Cameroonian soldiers were killed, on April 5, by Boko Haram members at Zigagué, in Waza, in the Far-North. "The soldiers were ambushed by the Islamist sect as they were trying to reach their post in Mada on their way back from a periodic market 1 km away," a security source said.

The attackers took the deceased's weapons, ammunition and the motorcycle they were riding. Warrant Officer Sali Mahamat, one of the two victims was the head of the Multinational Joint Force (MJF) post in Mada and Wambori.

Zigagué, located on Mora-Kousseri road along the border between Cameroon and Nigeria, is considered a dangerous area. It was formerly the den of highway robbers but has been “cleaned” by the BIR, an elite force engaged in the fight against large-scale banditry in the Far-North region.

Since the start of the war against Boko Haram, the jihadist group founded in Nigeria has been trying to set up its rear bases in this locality. The terrorist group has committed numerous crimes there. For instance, on January 8, a truck belonging to a brewery company was attacked by a dozen Boko Haram fighters. Another truck loaded with goods bound for Kousseri was also attacked in the same area, killing one person.

People in the area fear the worst since the Chadian army’s operation was completed last week. "With the losses suffered by the Boko Haram against the Chadian army in the Lake Chad area with the operation 'Bouma Anger,' we fear an escalation of their attacks in our localities. The defense forces need to be extra vigilant and review their tactics before the worst happens,” said a local traditional leader.

Since 2014, the Cameroonian army has been waging war against the Islamist sect Boko Haram. Weakened by the joint offensives of the Lake Chad states, the terrorist group is again now concentrating its attacks in the Mayo-Sava and Mayo-Tsanaga departments at the Cameroon-Nigeria border. Their attacks are notably concentrated in Kolofata and Mayo-Moskota districts.