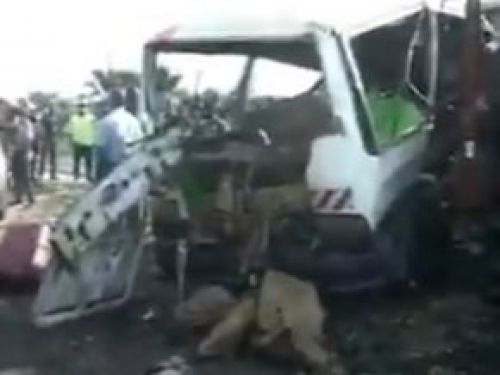 Seven people die, many others injured in a road accident at Bonomo

At least seven people have died in a road accident that occurred on Wednesday, May 6, 2020, at Bomono, not far from Douala, CRTV reported in its 8 p.m. news bulletin the same day. The report also mentions several injured people who were admitted to various medical facilities in the city of Douala.

According to the same source, this accident involves an interurban transport bus and a truck that collided on the National Highway No. 5 connecting Bafoussam and Douala.

It is suspected that one of them was over speeding but an investigation should be opened soon to determine the causes of this umpteenth accident on Cameroonian roads. The National Road N°5 is one of the most accident-prone roads in the country. On March 12, three people were killed and four others injured in a serious road accident at Bomono. Also, according to the Ministry of Transport, 937 people died in road accidents in 2019.

The U.N. Economic Commission for Africa (UNECA) ranks Cameroonian and Ugandan roads the deadliest in Africa. Road safety performance reviews, undertaken jointly by UNECA and the secretariat of the UN Secretary-General's Special Envoy for Road Safety, reveal that an average of 16,583 road accidents and 1,500 deaths are recorded each year in Cameroon.

The risk of death on the country’s roads is estimated at 26.7 per 100,000 inhabitants. In 2014, the UN identified Yaoundé-Douala axis as one of the most dangerous roads in the world.

Because of these road accidents, the national economy loses nearly XAF100 billion every year.

To effectively combat accidents and reduce the number of deaths that ensues, the government commissioned an external study in 2018 to evaluate the 2009-2014 national strategy for road safety and accident prevention developed for the period 2009-2014, with a view of updating it.

The French institutes of Douala and Yaounde will host the fifth edition of the...