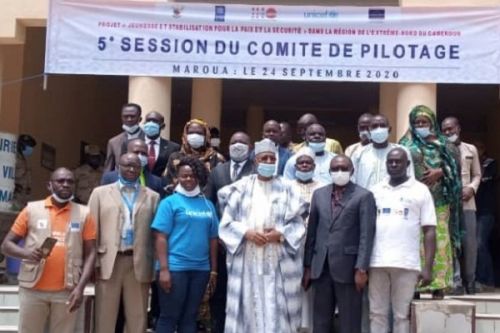 Twenty (20) ex-hostages of the Islamist sect Boko Haram have just been reunited with their families in the Far North region. Captured by the sect during several incursions into the villages of Limani and Amchidé, two border localities with Nigeria, some of them were held for more than three years.

“We suffered. We are coming out of hell and horror. We had to act as if we are committed to their cause to prepare our escape more serenely. We are happy that our communities are reaching out to us and we want to quickly return to normal life,” said Hamadou, one of the survivors. He was speaking on September 30 during the ceremony dedicated to the reintegration of these former captives of the terrorist group.

For a better reintegration, they will be taking part in the “Youth and Stabilisation for Peace and Security in the Far-North of Cameroon (JSPS)" project. This care includes psychosocial and psychiatric follow-up. This will be "provided by volunteers trained by the JSPS project in 12 communities affected by the security crisis in the Far North region," explains Project Coordinator Léopold Mamtsaï Yagaï.

Since its launch in 2019, the initiative has already provided psychosocial care to 1,275 young ex-hostages, members of vigilance committees, vulnerable people, and other "border practitioners," according to the coordinator. At the same time, 567 young people have been trained in trades, entrepreneurship, and cooperative life.