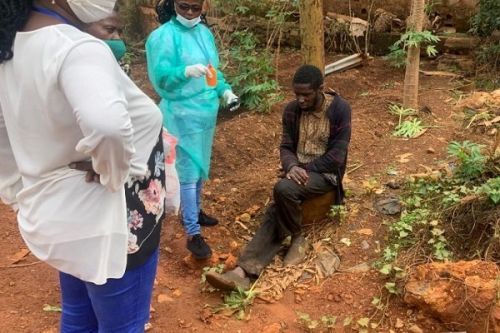 In May 2021, the Yaoundé Urban Community (CUY) launched an operation to take care of mentally-ill people found wandering in the city, in collaboration with the Ministry of Public Health (Minsanté). To date, nearly 300 of those people have been transferred to the Jamot Hospital. Some of them have been reunited with their families, according to authorized sources contacted by SBBC.

The operation is dubbed "Zero mentally ill people in the streets of Yaoundé." It aims to take mentally-ill people wandering in the city to the hospital for treatment and reunite them with families once cured.

According to our sources, most of the patients treated suffer from schizophrenia and behavioral disorders caused by drug use.

They are cared for at the Jamot Hospital in a special pavilion called "Village de l’Amour” rehabilitated by the CUY. The Yaoundé City Council also pays for their accommodation, food and treatment. Specialists reveal that the treatment provided combines healthcare and social care. "We take care of them here at Village de l’Amour. We continue with the same care  when they are reunited with their families," said Dr. Laure Mengueme, deputy director of mental health at the Ministry of Public Health.

The patients reunited with their families are followed-up to make sure they do not relapse. If they eventually relapsed, they are taken back to the hospital. The campaign was supposed to end in December 2021 but it was extended for an unlimited period to make sure no mentally ill people are left wandering in the city, the CUY informs.