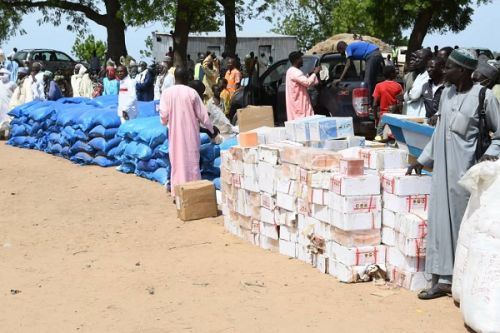 The Cameroonian government, in analysis and diagnosis of the food and nutrition situation (Harmonized Framework) in the country, revealed that 1% of the population is suffering from hunger. This equates to about 257,000 people, most of whom are in the Far North region.

"The 2021 season has been marked by droughts in some departments, particularly Logone-et-Chari, Mayo-Danay, and Mayo-Kani. There have been attacks by armyworms that have devastated crops and attacks by granivorous birds as well as migratory locusts. In Mayo-Kani, there have also been pachyderm attacks. All of these have contributed to a decrease in household food stocks," said Gabriel Mbairobe, Minister of Agriculture and Rural Development (Minader), speaking on CRTV-Radio on July 7.

Thanks to the financial support of $500,000 (more than CFA320 million) from the UN Food and Agriculture Organization (FAO), the government recently provided food aid to the most vulnerable populations, mainly in the Logone-Birni district. But this aid is not enough.

The government has also just launched the Emergency Support Project to improve food security for the most vulnerable households in the district. The project aims to boost the production capacity of people who were unable to grow crops because of the inter-community clashes between Choa Arabs and Mousgoums last December.

The updated Harmonized Framework also shows that nearly 2.6 million people are under food pressure in Cameroon. They could be in a food crisis at any time.