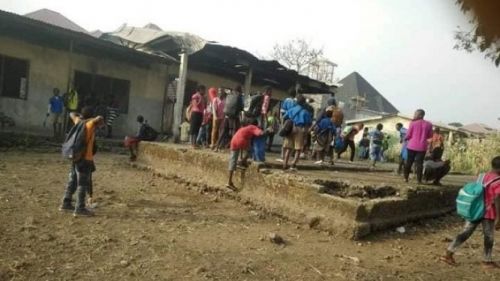 In the early hours of February 8, 2022, some of the buildings of the Bilingual Grammar School Molyko, Buea was set ablaze. According to witnesses, residents awakened by the fire claim they saw armed men leaving the scene. This suggests the arson was perpetrated by separatist groups active in the region since 2017. Those groups usually target schools, killing or abducting teachers and students.

"While armed separatists bear full responsibility for their targeted attacks on education, the response by the Cameroonian government and security forces has been insufficient and is hampered by the fact that they have conducted many abusive counterinsurgency operations in the English-speaking regions which sewed deep distrust among the civilian population victimized in those operations (...) Human Rights Watch documented the kidnapping of at least 268 students and education professionals by armed separatists between January 2017 and August 2021.

In two incidents alone, one in 2018 and another in 2019, fighters kidnapped 78 and 170 students, respectively, from their schools in the North-West region. Most of the victims (255) were students, while nine were teachers and four were principals. Victims said that the separatist fighters targeted them because they were going to school. (...) At least 70 schools have been attacked in the Anglophone regions since 2017," Human Rights Watch wrote in a December 2021 report.