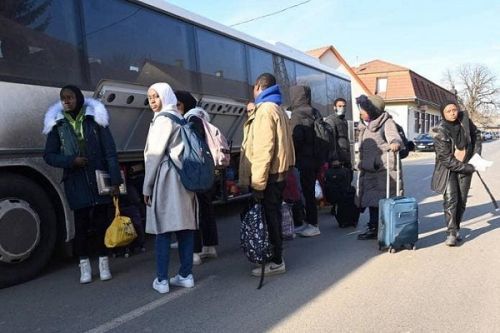 Poland: Cameroonian volunteers to assist their compatriots in Ukraine

People are coordinating themselves to help Cameroonian nationals living in Ukraine, which has been the target of a Russian military offensive since February 24, 2022.  According to the Cameroonian embassy in Germany, many Cameroonians living in Poland have volunteered to host their compatriots fleeing the war in Ukraine.

"Since the beginning of the crisis, in coordination with the embassy, the volunteers and many other Cameroonians have sacrificed their time, energy, and resources to provide assistance and relief to our compatriots in distress in Ukraine. They have been welcomed, fed, guided and for some accommodation was provided," said Ambassador Victor Ndocki in a statement issued on March 7.

Cameroonian Merlin Dsadheu Tchinde, who lives in Poland's capital Warsaw, became popular on the Internet for renting a 50-seat bus to help his compatriots stranded at the Polish border. The video in which he is seen in an empty bus on his way to the Polish border went viral on social media.  The Cameroonian engineer and entrepreneur told BBC that he successfully moved hundred people -Cameroonians and Africans alike- who are taken care of by associations or other compatriots living in Poland.

"I already have many people living with me at home. So, as I no more have housing capabilities, I turned to associations so that they can provide accommodation to those people. I also turned to other Cameroonians already residing in Warsaw for rooms, mattresses, clothes, and anything necessary for those people,” he said.

On March 5, a delegation from the Embassy of Cameroon in Germany went to Poland to meet with representatives of the Cameroonian community in this country bordering Ukraine. The delegation took that opportunity to salute this ‘solidarity drive that honors Cameroon.’ It also commended “the perfect collaboration, marked by respect, sincerity and abnegation, between the embassy and those compatriots totally committed and particularly devoted,” said the head of that diplomatic mission.

Let’s note that the Cameroonian embassy in Germany currently covers Poland, Austria, the Czech Republic, Estonia, Lithuania, Latvia, North Macedonia, and Montenegro, pending the completion of the ongoing redesign of the diplomatic missions covered by each post.