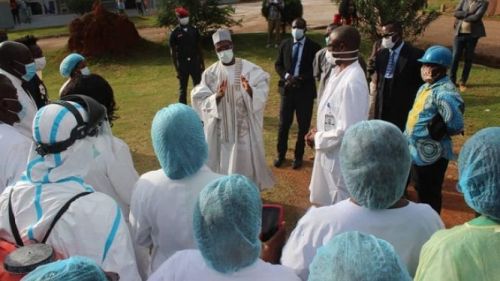 Several agents of the Ministry of Public Health (MINSANTE) have been suspended for 3 months on corruption and extortion charges. During their suspension period, the concerned agents will not receive salaries, according to two communique signed on April 8, 2021, by MINSANTE Manaouda Malachie.

On February 15, 2021, the MINSANTE announced the establishment of a toll-free number (1506) following the resurgence of complaints, from hospital users mainly, pointing at agents under his Ministry.

Using the toll-free number, users can report the illegal practices they witnessed in health facilities. The practices include extortion, sequestration of some patients and even their families, illegal drug sales, sending patients to private hospitals when they come to public health centers, etc... At the time, the MINSANTE explained that the information provided by users would be used to find ways to improve the quality of the services provided to them.

According to the 2019 Corruption report published on December 17, 2020, by the National Anti-Corruption Commission (CONAC), the MINSANTE is the ninth most corrupt public administration in Cameroon.

Therefore, to end that phenomenon, apart from the above-mentioned toll-free number, the MINSANTE regularly makes unexpected visits to health facilities. During the visits, he sanctions both the office and medical staff caught indulging in illegal practices. For instance, on February 9, 2021, the MINSANTE suspended Dr. Maurice Ngeumtcheng from performing any duties at the Bafia district hospital for "serious violation of professional ethics and deontology." The suspension is for three months, renewable if necessary.