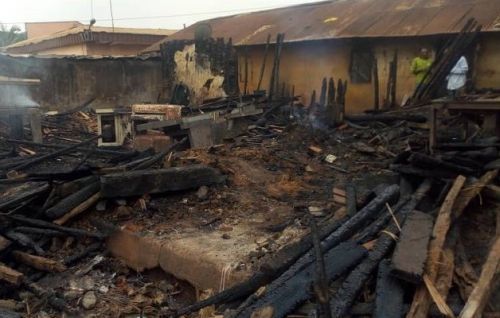 A fire occurred at the central market of Foumban in the West, on the night of June 8 to 9. Many videos shared on Facebook in particular show how devastating the flames were, consuming several stores. According to Cameroon Tribune, the fire broke out around 2 am.

With no fire station in the area, people managed to stop the fire on their own and save what could be. The incident did not kill anyone, but there was significant material damage. The cause of the fire is still unknown. But some think that the anarchic electrical connections in this commercial space could be the cause.

The Sultan King of the Bamoun, Mouhammed Nabil Mforifoum Mbombo Njoya, came down to the scene to see the damage and support the victims. This incident comes two years after the same market caught fire in 2020 with material losses estimated at several tens of millions of CFA francs.

Such tragedies highlight the urgent need to modernize Cameroon's markets. To date, two so-called "modern" markets built by the military engineers have already been inaugurated in Bertoua (East) and Sangmélima (South), after fires consumed almost all the previous market spaces in these two cities.