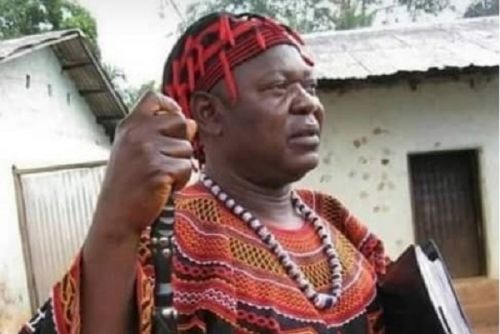 A mosque was burned down yesterday, March 9, in Esu, department of the Menchum, in the North-West. According to residents, it was a reprisal for the death of the Fon (traditional chief) of Esu, who was killed in an ambush believed to have been organized by Mbororo pastoralists.

Fon Kum Achou Kawzuh Albert Chi (photo) died from several gunshot wounds. His first wife was also killed but his second wife was only injured. The Traditional ruler fell in that ambush on his way back from Weh, where he had attended the inauguration of another Fon, local sources report.

In the North-West, the already strained relationship between the Mbororos and the sedentary population deteriorated further with the separatist crisis that broke out in late 2016.  Indeed, to protect themselves from separatist attacks, the Mbororos formed vigilante committees. However, separatists often accuse them of supporting the regular army.