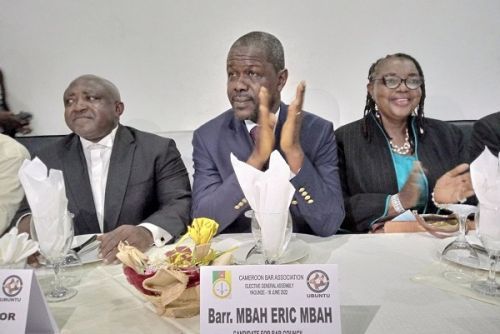 Mbah Eric Mbah, the new president of Cameroon’s bar, recently appointed Yolande Ngo Minyogog as the secretary-general of the bar council. The appointee is the lawyer who came to the limelight with the second Titus Edzoa case.  At the time, she was representing the state in an embezzlement case between the government and Edzoa Titus, former secretary-general of the presidency of the republic. In the first ruling, the secretary-general was condemned to 20 years imprisonment but, just months later, the condemnation was commuted, prompting the second case that brought Yolande Ngo Minyogog to the limelight.

As the treasurer of the bar council, the  President appointed Claude Assira, the son of a famous magistrate. He was the lawyer of former secretary-general of the Presidency of the Republic  Jean-Marie Atangana Mebara in his fund misappropriation case. He is also an academic and author of  “Procédure pénale camerounaise et pratique des juridictions camerounaises ” published byClé in Yaoundé.

"The positions of regional and provincial delegates were the most sought after,” said a lawyer that supported Mbah Eric Mbah’s candidacy.

“The reason many people want the position of regional or provincial bar delegate is that they can represent the bar president in those regions or provinces in any case under his competence, except for the taxation of fees higher than XAF50 million or when public administrations are involved,” we learn.

Mbah Eric Mbah, 52, was elected president last month for a two-year term. His campaign slogan was  "Ubuntu", meaning "I am because you are." The Ubuntu philosophy popularised through Desmond Tutu’s Ubuntu Theology advocates for humanism, solidarity, and unity.  Shortly after he was elected the president of Cameroon’s bar, Mbah Eric Mbah explained that one of the urgent tasks on his list was the appointment he just made.