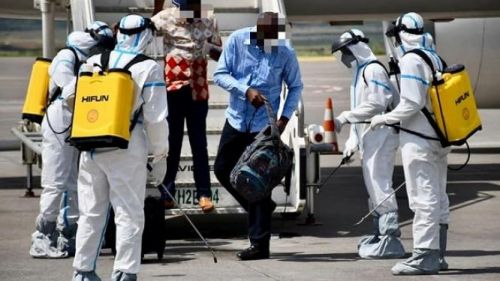 Some 1,252 Cameroonians stranded abroad as a result of the border closures prompted by the coronavirus pandemic have been repatriated to Cameroon. After a first contingent of 675 Cameroonians, a second wave of 577 compatriots was repatriated between May 9 and 12, 2020.

A flight of Ethiopian Airlines landed early in the afternoon of Tuesday, May 12, 2020, at Yaounde-Nsimalen International Airport with 97 passengers on board from the United States, Canada, Sao Tome and Belgium, CRTV reported.

On Monday 11 May, 61 Cameroonians stranded in the Central African Republic (CAR) were returned home after almost two months of forced stay outside the country. On 10 May, 78 Cameroonians from Tunisia and Togo landed in Nsimalen, according to the Facebook page of the Ministry of External Relations (Minrex).

On 9 May, the government repatriated 202 of its citizens from three West African capitals (Dakar, Cotonou and Abuja) and on the same day returned 139 compatriots (out of 152 registered by the Cameroonian General Consulate in Dubai) who were stranded in the United Arab Emirates, according to the same source. Among them were government personnel, scholarship students and entrepreneurs.

Upon disembarking from the plane, all passengers are subjected to a rapid coronavirus screening test, with results available within 15 minutes. Those who test positive are immediately placed in quarantine in the Covid-19 specialized patient care centers, where they are monitored by a medical team. Those who test negative can go home, but remain under observation for 15 days.

This operation, instructed by Head of State Paul Biya, is part of the vast repatriation programme. It is aimed at repatriating Cameroonians who were temporarily staying, at the end of their stay or in transit abroad on the date the borders were closed on March 18. According to the MINREX, which has been tasked to speed up the procedures to return these “distressed Cameroonians,”  this operation cost the state about XAF700 million.