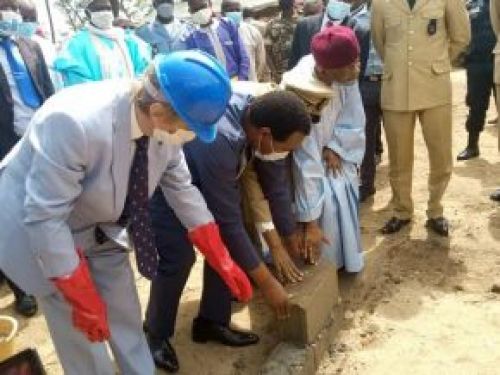 Far North: A modern maternity ward to soon be built at the Rohan-Chabot integrated health centre in Mokolo

A modern maternity ward will soon be built at the Rohan-Chabot de Ziling Integrated Health Centre (CSI) in Mokolo, in the Far North region. This is good news for the caregivers and mothers of this health centre since it will help reduce maternal, neonatal and infant mortality in this part of the country where health indicators are below the national average.

On July 8, the Secretary of State to the Minister of Public Health (Minsanté) responsible for the fight against epidemics and pandemics, Alim Hayatou, and the Ambassador of the Sovereign Order of Malta to Cameroon, Jean Christophe Heidsieck, laid the foundation stone of this infrastructure.

The work, whose overall cost is estimated at nearly CFAF130 million, is the result of cooperation between Cameroon and Malta. According to the Minsanté, the construction of this maternity ward is "the concretization of an old promise" made by the Prince and Grand Master of the Sovereign Order of Malta, Fra'Giacomo Dalla Torre del Tempio di Sanguinetto (he died in Rome on April 29th), during his official visit to Cameroon in July 2018.

"It is absolutely necessary to now give priority to women so that they can give birth in the best possible conditions, like women in other regions of Cameroon. This project was created and developed by the Order of Malta. The Head of State has instructed that a special grant be dedicated for this purpose," the Maltese diplomat said.

Cameroon is among the first African states to establish diplomatic relations with the Sovereign Order of Malta (in 1961). Bilateral cooperation between the two countries covers the health and humanitarian fields. The Order has financed the construction of a nutrition centre for children orphaned by AIDS at the Rohan-Chabot de Ziling IHC in Mokolo.