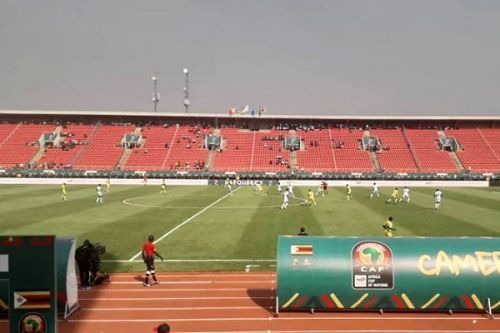 Cameroonian authorities are taking several measures to boost stadium occupancy rates at the ongoing African Cup of Nations the country is hosting. In the West, elites, and officials are hard at work to make sure fans are going to stadiums to watch matches, especially Day 2 matches of group B this Friday, January 14 at the Kouekong Stadium in Bafoussam.

On Thursday, January 13, Awa Fonka Augustine, Governor of the Western region, urged heads of the public service, parastatal and private entities in his administrative district to allow their staff to go home by noon so that they can go to stadiums to watch the Senegal-Guinea and Malawi-Zimbabwe matches scheduled respectively at 14h and 17h.

In the communique published in that regard by the governor, it is explained that the request was prompted by workers' and soccer fans’ demand to be allowed to watch the matches of Group B of the AFCON TotalEnergies Cameroon 2021 to be played in Bafoussam. For her part, Celestine Ketcha Courtès, former mayor of Bangangté and now Minister of Housing and Urban Development (Minhdu) is offering tickets to young people for mass attendance.

A similar measure was taken by MP Albert Kouinche, who is also president of the CPDM (ruling Cameroon People's Democratic Movement) section of Koung-Khi, in the West. The MP also made a bus available to help the population make the to and fro journeys between the Kouekong stadium and Bandjoun. He also sent a message to the entire population inviting them to massively attend the events to contribute to the success of the competition in Cameroon in general and the West in particular.

Roger Tafam, mayor of Bafoussam, was the first official to announce that free bus shuttles were available to the population for the games to be played in the city today. In Yaounde, local authorities have also made arrangements to facilitate the movement of fans going to Olembe stadium where the national football team is playing its group matches. On January 6, Naseri Paul Bea, governor of the Centre, announced that three minibusses have been arranged for fans who are going to cheer the national football team in its bid to secure the continental cup for the sixth time.

Let’s note that after the exceptional attendance during the opening match on January 9, the latter matches were played in almost empty stadiums. The exception was the match between Nigeria and Egypt. For the Cameroon-Ethiopia match (4-1) on Thursday, January 13, few fans were present at the 60,000-seat Olembe stadium despite the authorization of the Confederation of African Football (CAF) to fill it up to 80% of its capacity.

The low occupancy rates being recorded appear as a failure, given that Cameroonian authorities have always called for a general mobilization for the success of the continental sporting event. But, one factor explaining it is the anti-Covid-19 health protocols that may have dampened the enthusiasm of supporters. Indeed, access to the stadium is subject to mandatory vaccination in a country where only 4.6% of the population was fully vaccinated by December 20, 2021 (according to data from the Expanded Programme on Immunization-EPI). Meanwhile, authorities’ ambition was to vaccinate at least 20% of the target population before the launch of the competition. Other factors include the schedule of some matches and the ticket prices (that some fans deem high).

On January 11, Minister of Communication René Emmanuel Sadi issued a mobilization call asking everyone to fill the stadiums all through the competition.  "The government, through me, urges all Cameroonians to continue to try, in strict compliance with the rules, to attend the various matches in a spirit of fair play, discipline, and solidarity because it is the only way we can win the bet (...) of making this AFCON the most beautiful ever organized on the African continent," said the government spokesman.