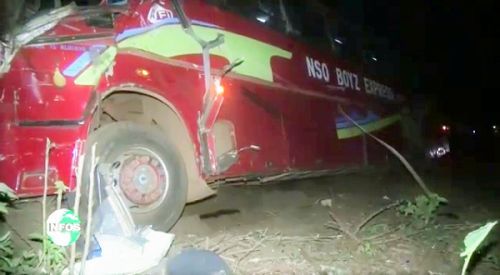 Road safety: 8 die in yet another accident in Loum, Littoral region

At least eight people were killed and several others injured in a traffic accident on the Nkongsamba-Douala highway on the night of February 14-15. According to state media Cameroon Tribune, citing administrative authorities, the accident occurred at Loum Km 99, in the department of Moungo.

It was caused by the collision of two intercity buses. One of the buses belongs to the NSO travel agency and the other one to Etoile Star travel agency. The circumstances of the accident are not yet known but this is not the first accident recorded on this road section this year.

In January, two people died in a collision between two semi-trailer trucks in Ngwa, a village in Nkongsamba.

Traffic accidents are common in Cameroon. On average, the country records over 16,000 roads accidents every year. Those accidents claim the lives of 1,200 people according to official figures but the World Health Organization claims the yearly deaths exceed 6,000.

To put an end to this situation, the government is stepping up prevention and road safety campaigns.