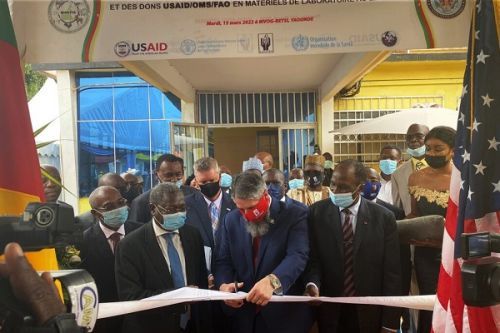 The U.S. government, through its agencies, has renovated and donated laboratory equipment and supplies to the Annex of Cameroon National Veterinary Laboratory (Lanavet) in Yaoundé. The building, located in the Mvog-Betsi district, was inaugurated on March 15, 2022, by Dr. Robert Pope, Director of the Cooperative Threat Reduction Program of the U.S. Government’s Threat Reduction Agency (DTRA).

The renovation was funded, to the tune of XAF1.845 billion, by the DTRA, a US federal agency, the U.S embassy to Cameroon informs in a release issued yesterday. As for the equipment and supplies, they were funded, to the tune of XAF192 million, by the United States Agency for International Development (USAID) under the Emerging Pandemic Threats program implemented by the Food and Agriculture Organization (FAO), the same source reveals.

“We view Cameroon as a regional leader and strategic partner in improving animal health and health security in Africa.  Building a cohesive laboratory network for Cameroon will improve national disease surveillance capacities across the country, enabling earlier detection and quicker response to disease outbreaks. It will save lives,” commented Dr. Robert Pope as quoted by the above-mentioned release.

The renovated annex is inaugurated in a context marked by an avian flu outbreak in the West, Cameroon’s largest poultry-producing region. So, during the inauguration, the Minister of Livestock, Fisheries, and Animal Industries (Minepia), Dr. Taiga, thanked the U.S. government for this support and affirmed that Cameroon will continue to work to prevent livestock and zoonotic diseases for the well-being of its population.

Created in 1983 with its headquarters in Garoua (North), LANAVET is responsible for epizootic disease surveillance and the study of animal diseases. It also produces and sells animal vaccines and drugs.