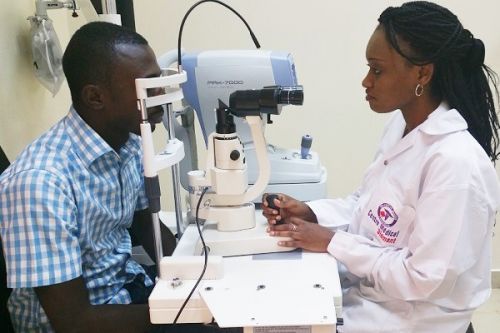 Officially, road accidents kill over 1200 people in Cameroon every year. To end that scourge, the government has been implementing strategy upon strategy. The latest is an eye screening campaign. On March 15, 2022, Minister of Transport Jean Ernest Masséna Ngalle Bibehe launched a campaign aimed at freely screening drivers for eye problems.

Over 200 drivers are expected to check their ocular health during this operation organized in partnership with Magrabi ICO Cameroon Eye Institute (MICEI), the first specialist hospital to provide eye care in the Central African region.

According to the government, during a similar campaign, it was discovered that 1573 out of the 1806 drivers checked had visual deficiencies.  Therefore, authorities are planning to multiply such campaigns to let every driver have an idea of the state of their ocular health, explained Jean Ernest Masséna Ngalle Bibehe (according to government daily Cameroon Tribune).

This operation also aims to prevent and inform on the dangers of low vision since some data show that visual information constitutes 90% of what is needed to drive. Hence the theme of this campaign: When driving, sight is life."

In Cameroon, the Demographic and Health Survey EDS-MICS 2011 revealed that 2.2% of Cameroonians suffer from visual impairment.  However, it is difficult to know how many drivers are affected since there is no accurate data yet.  "Many drivers suffer from eye diseases but just a few of them go for consultations. The most affected are those on motorcycles because their eyes are constantly exposed to wind and dust. This damages their eyesight," says Jean Vidal Nji, national president of the Union of Professional Drivers. He is convinced that this initiative could save lives on Cameroonian roads.