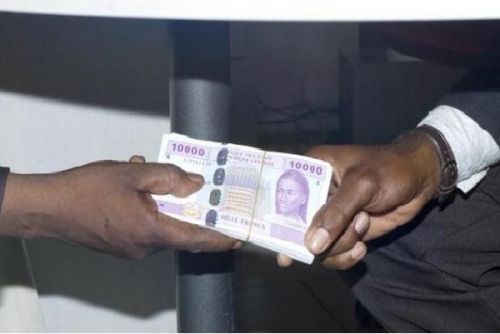 The Cameroonian National Anti-Graft Commission (Conac) revealed in a Nov. 10 report that the government lost a total of CFA43.947 billion to corruption last year. This is CFA26.3 billion more than the previous year.

The document was prepared following investigation missions with the Budgetary and Financial Disciplinary Council (Cdbf) – an arm of the Supreme State Audit Office, and the decisions of the Special Criminal Court (TCS) -a court created in 2011 in charge of punishing offenses of embezzlement of public funds when the damage reaches at least CFA50 million.

"Evidence of corruption was gathered either through denunciations received by Conac or through investigations, inquiries, and control missions or rapid interventions on the ground," the report reads. In 2021, Conac said it received 6,705 denunciations (compared to 16,067 in 2020) from all regions of the country and abroad. It also carried out 16 rapid intervention actions (compared to 19 in 2020) for various cases of fraud and corruption, and conducted 6 investigative missions (compared to 2 in 2020). Conac found after investigations last year that the state suffered a total financial damage of CFA24.801 billion, of which CFA24.249 billion are attributable to the Cameroon Debt Recovery Corporation (SRC), which was singled out for various "irregularities" between 2011 and 2014. The Cdbf made 24 decisions concerning current or former public officials during that year. Of the 24 individuals brought before the court, eight were convicted and fined a total of CFA8,800 million in special fines.

"Some of these officials were fined a total of CFA600,844,610 representing the financial loss suffered by the State of Cameroon in these cases," we learned. For its part, the TCS issued 17 final judgments for cases relating to the offense of misappropriation of public property and 37 people were found guilty. The total amount of financial damage suffered by the state here is CFA18.545 billion, according to the report. The document reveals that the territorial administration tops the list of the eleven most denounced sectors in 2021.

Users said they were sometimes forced to pay bribes for public services that are normally free of charge. They also denounced the extortion of funds by mayors and the demand for financial and material support from citizens during field visits by inspection and evaluation commissions. The Health sector closed the top 11 most corrupt sectors. Corruption in the establishment of Covid-19 test results, scamming in the establishment of medical certificates, ransom, embezzlement of patients, and illicit sale of medicines are, among others, the evils blamed in this sector.