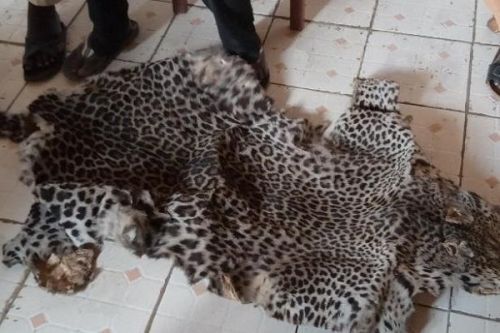 Last February 23, a network of suspected animal skins traffickers was dismantled in Melong. The network was dismantled by the Moungo Departmental Delegation of the Ministry of Forestry and Wildlife, in collaboration with the Melong Gendarmerie Division and Laga, an NGO. Two members of the group were arrested while trying to sell a panther and a civet skin. According to sources close to the case, the members of this network collect those skins from their partners in the West, North-West, and South-West regions and then resell them in Melong, in the Littoral.

One of the men arrested (he is believed to be the mastermind behind this illegal activity) is said to have transported the panther skins from Mbouda to Melong, concealing them in ordinary bags. Investigations are ongoing to trace the chain of command and dismantle the remaining network, we learn.

"Wildlife trade is increasing daily despite the measures introduced to protect wildlife in Cameroon. This has prompted environmentalists and some wildlife advocates, such as World Animal Protection, to call for strict measures and policies to protect wildlife against over-exploitation,” explains Laga, the NGO that supports the government in the implementation of wildlife laws.

Panther is considered an endangered species. As such, it is on the International Union for Conservation of Nature (IUCN)’s red list. Its skin is much sought after for decoration, threatening its survival. To protect the animal from extinction in Cameroon, the 1994 wildlife law provides that any person found in possession of all or part of a protected species is considered to have killed or captured it and is liable to up to three years of imprisonment and up to XAF10 million fine.