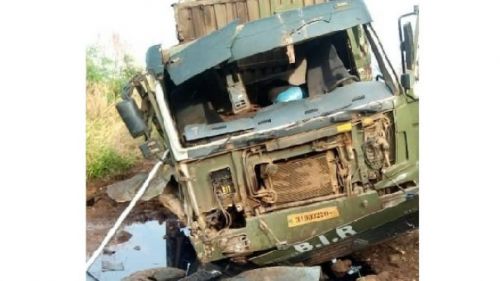 Yesterday, a patrol of two army armored vehicles was ambushed by an improvised explosive device (IED) on the Bamessing-Sabga road, in the Ngoketunjia department, Northwest region. Several soldiers of the Rapid Intervention Battalion (BIR) were killed by the separatists, security sources reported. Other unconfirmed sources say at least 15 soldiers were killed.

Separatists claimed responsibility for the attack in videos posted on social media. The videos show fighters posing in front of burnt-out armored vehicles or wearing uniforms and weapons taken from soldiers. Other videos show the bodies of mutilated or burned soldiers.

According to some observers, two pro-independence militias carried out this attack. These are the Jaguars of Bamessing, commanded by General Sagard, and the Marines of Bambalang, one of the most fearsome rebel groups in the northwest region, led by General No Pity.

The Marines of Bambalang have carried out several attacks in the Northwest region, but also in the neighboring Western region. This new attack comes five days after the Kumbo ambush, which claimed the lives of many BIR soldiers.

The Anglophone crisis has already claimed more than 3,000 lives, according to the International Crisis Group. The crisis has also caused several hundred people to become refugees and internally displaced persons.