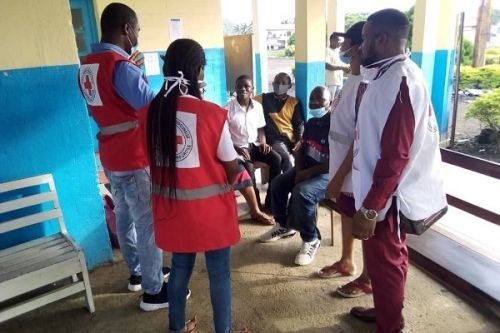 Cécile Akame Mfoumou, the National President of the Cameroon Red Cross, presided last October 13 over the launching ceremony of phase 2 of the Humanitarian Assistance and Resilience Support Project for displaced populations and host communities in the departments of Mayo-Sava in the Far North region, and Noun and Bamboutos in the West region. The ceremony took place in Foumban.

This phase of the project is expected to benefit 79,409 people, including 39,984 women and 39,425 men for a total of 10,180 households. It is scheduled to end in February 2023. Through this program, the Cameroonian Red Cross is providing humanitarian aid in the areas of health, nutrition, water, hygiene, and sanitation to displaced populations, with the support of Japanese cooperation, which has been the project partner since day 1.

“Japan agreed to join forces with the Cameroon Red Cross to support these vulnerable people,” said Tatsuki Sakai, the Japanese ambassador to Cameroon. Adesh Tripathee, the head of the delegation of the International Federation of Red Cross and Red Crescent Societies in Cameroon –the project’s technical partner- also attended the launching ceremony in Foumban.