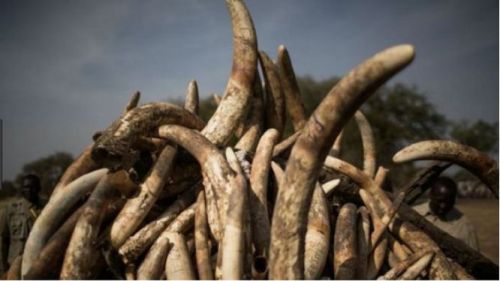 Cameroon recently requested Gabon’s "expertise" to trace the ivory trafficking circuit in the country, following the seizure of 118 elephant tusks on October 21 in Ambam, capital of Vallée-du-Ntem in the southern region. These tusks were discovered in a secret compartment built inside a truck on its way to Douala and the seizure was the largest ever made in this area that shares borders with Gabon and Equatorial Guinea.

In that regard, a team of Gabonese experts was received, on January 14, 2021, at the Ministry of Forests and Wildlife (Minfof) in Yaoundé.

According to the Minfof, the delegation "came to collect samples that will be analyzed in Gabon." "With the results, it will be easier to determine the geographical origins of the elephants killed," said  Maha Ngalié, Deputy Director of Development and Exploitation at Minfof. "Gabon is currently the only country in Africa that has a wildlife genetic analysis laboratory," he added in statements relayed by government daily Cameroon Tribune. "The objective of our presence is also to revive the collaboration between Cameroon and Gabon in the fight against wildlife crime," said Philippe Ongouli, one of the Gabonese experts.

"Further investigations revealed that some of the ivory came from elephant tusks seized by Gabonese authorities and held in government stockpile. This shows the extent and scale of international ivory trafficking," sources told Laga, an NGO that supports Cameroonian authorities in wildlife law enforcement. In Cameroon, the elephant is a protected species. However, despite the country’s law prohibiting its hunt and trafficking, it is heavily poached for its tusks, which are illegally sold in Asian markets.

According to the United Nations Office on Drugs and Crime (UNODC), wildlife crime is worth $8-10 billion annually. As for Cameroon, it is considered a hub for cross-border protected wildlife trafficking. "There are two main regional ivory transport routes, and they have not changed significantly over the past few decades. One involves ivory moving across the northern Gabon border into southern Cameroon, and then via road to coastal ports in Cameroon and especially Nigeria," says the World Bank in its report "BEFORE IT’S TOO LATE: Deriving Sustainable Value from Wildlife in the Western Congo Basin."

On October 30, 2020, Cameroon adopted a national strategy to fight poaching and wildlife crimes to reduce the risks they pose to species extinction and maintain the wildlife ecosystem and residents’ well-being.