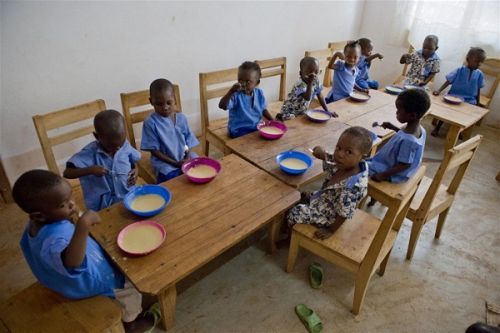 Last February 1, 2022, Wanja Kaaria, resident representative of the World Food Programme in Cameroon, met with Midjiyawa Bakari, governor of the Far-North, to discuss the creation of school canteens in the region. According to the World Food Program, that idea could encourage students to come to school in areas where there is food insecurity. As reported by the government daily Cameroon Tribune, the World Food Program will not build canteens. Instead, it will just provide support for such initiatives.

In some areas in Cameroon, most students come to school with no food and are therefore unable to concentrate on the lessons they are taught. Some children don’t even bother to go to school because they are needed on farms (in rural areas most of the time).

For the WFP, school canteens will help reduce school dropout rates by boosting enrolment, attendance, and student performances because it is proven that hunger affects children's cognitive functions and their ability to learn the lessons they are taught.

Since 2018, the WFP has been jointly conducting school feeding activities with the government in the regions most affected by food insecurity and where enrollment indicators are among the lowest in the country. According to the National Survey on the Food Security and Nutrition Situation in Cameroon (Ensan), acute food insecurity affects 5 million people in the country.

The WFP claims it distributed 6,000 tons of cereals in 2021 in the Far North, a conflict-affected region plagued by hunger and malnutrition.