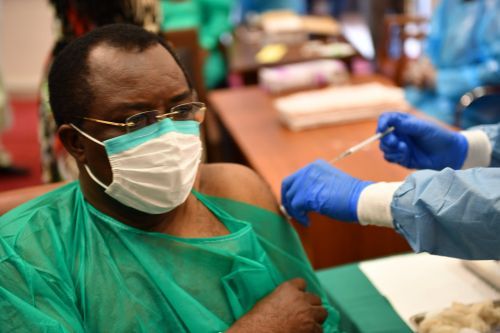 In Cameroon, about 70,300 people have received their first dose of the Covid-19 vaccine since the vaccination campaign was launched on April 12, according to the latest figures. But only 16,200 have received the second injection of the vaccine, even though health experts say the second dose is important for good protection. They say it would increase the effectiveness against severe forms of the disease.

"While the stocks available to date can cover a significant part of the projected vaccination needs, we note, with some embarrassment, a low evolution of the expected vaccination rate," said the Minister of Communication (Mincom), Rene Emmanuel Sadi, at a joint press conference with his counterpart of Public Health (Minsanté). Of the 591,200 doses of vaccine received, only 15% of the stock has been used so far, with a rate of 1,000 new people per day.

The government's ambition is to vaccinate at least 20% of the population before the African Cup of Nations, which the country is organizing from January 9 to February 6, 2022.

"This 20% target is the minimum coverage necessary to protect against a possible third wave that could occur just before the start of the competition. As a result, intensification strategies aimed at reaching an average of 5,000 people vaccinated are already underway," said Minsanté, Manaouda Malachie. Since the confirmation of the first cases of infection on March 6, 2020, Cameroon now has 80,090 confirmed cases, including 77,305 recoveries and 1,310 deaths as of June 11, 2021.