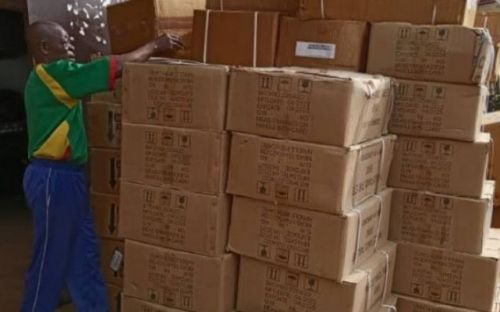 The Cameroonian National Gendarmerie announced it has seized a large stock of “fake medicines” on the night of November 12 at the Imo dam in Nkongsamba, Moungo department (Littoral). Overall, it includes 539 boxes of anti-inflammatories, antibiotics, analgesics, antifungals, syrups, etc. Two people -the car driver and the supposed cargo owner- were arrested and placed in custody, we learned.

“The cargo owner came to the gendarmerie station of Nkongsamba (which conducted this operation, ed) with CFA300,000 trying to bribe the officers. He was immediately arrested on the instructions of the colonel commanding the Littoral gendarmerie legion,” the gendarmerie station said on Facebook. The two men will be brought before the public prosecutor at the Court of First Instance (TPI) of Nkongsamba "in the coming days". Investigations are still ongoing to find possible accomplices, according to the same source.

Let’s note that fake drug trafficking is recurrent in this part of Cameroon. Last June, gendarmes seized 128 boxes and three bales of fake drugs in the city. The cargo was stored in a makeshift warehouse.

The new seizure comes at a time when the Ministry of Public Health (Minsanté) is multiplying operations across the country, as part of the fight against fake drugs and the illicit sale of pharmaceutical products.