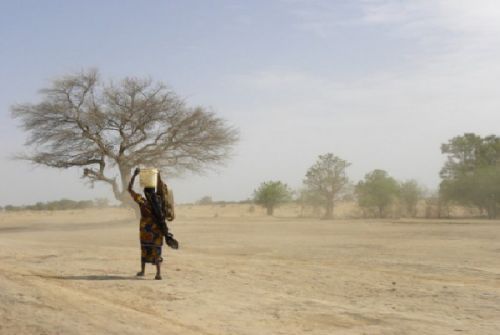 A "massive plume of Saharan dust carried by the Harmattan from central Chad" is covering the Far North through Logone-et-Chari department, the Ministry of Transport warned in a weather report released on February 17. The dust storm is expected to progress toward the North and Adamaoua regions, the report added. "These suspended dust particles will reduce visibility and deteriorate air quality," the ministry warns adding that the particles can affect human health.

According to experts, the high concentrations of dust from the Sahara are closely linked to meningitis epidemics in Sahelian countries. This is particularly the case in the Far North, an endemic meningitis area. But the most frequent diseases are respiratory, they say. "The inhalation of fine particles can trigger or aggravate asthma, but also bronchitis, emphysema, and silicosis," a doctor explained.

"The dust enters everywhere, even when doors and windows are closed. When we breathe, we breathe the dust in," said Mairamou, a resident of Kousseri.

Authorities advise residents to limit their movements outside or wear face masks to protect themselves when going out. Dust storms form when strong turbulent winds erode arid and semi-arid soils and raise particles. These storms can travel thousands of kilometers, carrying other pollutants and depositing particles far from their original soil. According to environmental activist, Didier Yimkoua, this meteorological phenomenon is common in the Sahelian zone and may be due to climate change.

"In the list of extreme phenomena caused by climate change, we talk about winds, storms, tsunamis, etc... Here, it is the wind that carries the particles, i.e the dust. These particles come from the desiccation of soils caused by heat," he explained. He believes that climate change could aggravate this type of storm. "That's why there have to be programs to adapt to climate change. Now, the advice is to wear a face mask but, it is just a protective measure. We have to think of preventive as well as protective measures. As far as preventive measures are concerned, we have to think about sustainable solutions such as planting trees because trees are windbreaks," Didier Yimkoua further explained.

To combat desertification, Cameroon has set up Operation Green Sahel, a vast reforestation program whose goal is to control the advance of the desert, to raise awareness, and educate people in civic actions for environmental preservation.

According to the Ministry of the Environment, Nature Protection and Sustainable Development (MINEPDED), 126 plots of land were reforested between 2008 and 2019 in the Far North, a region classified as an ecologically fragile zone. These trees should provide a larger grassy cover that would curb the effect of winds by attenuating the upswings of dust.