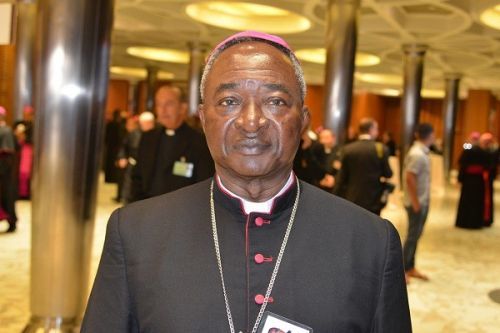 The Metropolitan Archbishop of Bertoua in the East, Archbishop Joseph Atanga (pictured), announced in a May 18 decree that he has decided to remove a priest from his diocese because of "serious accusations made by civil authorities and the media" against him. Father Emilien Messina, 46, priest of the Catholic parish of Saint-Esprit Château-Npoklota in Bertoua, is accused of "abuse on youth, rape of children between the ages of 16 and 21, and (transmission of) contagious diseases." These accusations are contained in a May 13 message sent by the director of the Bertoua central prison to the regional delegate of the prison administration in the East.

The priest has been arrested and detained in the central prison of Bertoua since May 12. Under the Code of Canon Law (internal Church law), the Archbishop of Bertoua forbids him "to participate publicly in the celebration of the Eucharist, to perform publicly any act of priestly ministry (and) to perform acts of parish government. Bishop Joseph Atanga specifies that this is a "preventive measure" that will be effective while the civil proceedings last.

The decision of the archbishop is based on Cann. 1717 of the Code of Canon Law, which states that “to prevent scandals, to protect the freedom of witnesses, and to guard the course of justice, the ordinary, after having heard the promoter of justice and cited the accused, at any stage of the process can exclude the accused from the sacred ministry or some office and ecclesiastical function, can impose or forbid residence in some place or territory, or even can prohibit public participation in the Most Holy Eucharist. Once the cause ceases, all these measures must be revoked; they also end by the law itself when the penal process ceases.”

The prelate was forced to make this decision given the “media light” on the case but also because of the scandal it caused in the Christian community. Archbishop Joseph Atanga said he took the measure "for the good of the Church and, in particular, to prevent other scandals and to guarantee the course of justice.”  Sanctions when a priest is accused of wrongdoing range from a ban on celebrating certain sacraments (such as the Eucharist or confession) to "dismissal from the clerical state," which is the maximum penalty provided for by canon law.

This is not the first time a priest has been sanctioned in Cameroon. In 2017, for example, a priest in the diocese of Obala (Central region) was banned for having entered into a marriage, a union that called into question the commitment to celibacy made when he requested and received ordination.