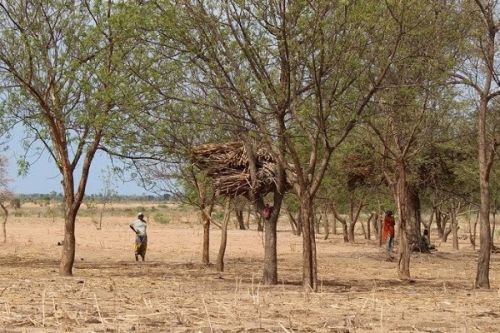 Between 2008 and 2019, 32,000 hectares of land have been restored in the Far North, in the framework of Green Sahel, a reforestation initiative to combat desertification in the region. According to the Ministry of Environment, Nature Protection and Sustainable Development (Minepded), during the stated period, the programme was implemented on 126 plots of lands in six departments, namely: Diamaré, Mayo Kani, Mayo Sava, Mayo Danay, Mayo Tsanaga, and Logone and Chari.

In addition to this Green Sahel operation, the Ministry of Agriculture and Rural Development (Minader), through Société de développement du Coton (Sodecoton) is carrying out another project to combat land degradation in the northern part of the country. "This project is aimed at restoring 100,000 hectares by planting cashew trees," explains David Payang, at the focal point of the United Nations Convention to Combat Desertification and Drought at the Minepded.

According to the Minister of Environment Hélé Pierre, since 2008, CFAF1 billion has been spent every year to combat desertification. In addition to reforestation, Cameroonian authorities are supporting the population through the distribution of improved stoves thanks to which the use of firewood is reduced.

"This is a way of implementing the sustainable consumption policy that requires the use of products in a way that preserves the environment. Moreover, we have established contact with domestic gas distribution companies asking them to supply gas to the population so that the wealthy families can use domestic gas instead of firewood," the official explained during an interview with the regional tri-weekly L'œil du Sahel.

Cameroon has 12 million hectares of degraded land, out of which the North, Far North, and Adamaoua regions make up 8 million hectares. The Far North is classified as an ecologically fragile area, according to the desertification combating unit at the Ministry of Environment.

Since the 1970s, the government of Cameroon has had a reforestation program whose goal is to control the advancement of the desert, raise awareness and educate people about citizen actions to carry out to preserve the environment. After a pause in its implementation, because of the economic crisis the country experienced in 1987, this operation was relaunched in 2008 through reforestation activities financed by the public investment budget of the State of Cameroon.