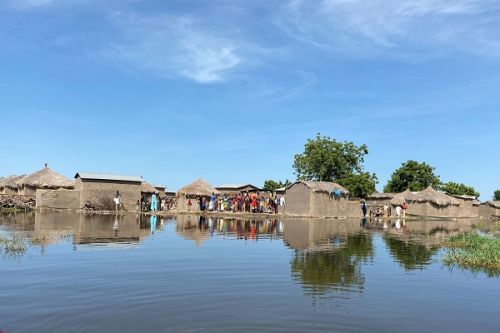 Over 22,000 people affected by flooding in the Far North

More than 3,836 households, the equivalent of 22,776 people, were affected by flooding in the departments of Mayo Danay and Mayo Kani, the Far North region, as of August 31, 2021. The stats were reported by the United Nations Office for the Coordination of Humanitarian Affairs (OCHA).

“Two people died, 5,443 shelters were destroyed, more than 1,500 hectares of fields were flooded, about 2,700 animals died or were swept away by the water, a dozen schools were flooded, and more than 200 latrines and 20 water points were flooded following rains that started in June,” OCHA reported, stressing that "continued rains and rising water levels could cause dykes along the Logone River and Lake Maga to break, resulting in rising water levels in riverside localities”.

In a region already plagued by Boko Haram attacks and insecurity, floods are making things worse. "The floods make travel in the region very difficult due to road deterioration, particularly in Logone et Chari, where humanitarian activities have been slowed in the districts of Makari, Fotokol, Blangoua, Zina, and Logone Birni. The movement of humanitarian actors between Maroua and Kousseri has become more difficult since both the National Road No. 1 and the Maroua-Bongor (Chad)-Datcheka-Kousseri road are in an advanced state of deterioration,” the report said.

The government has recently sent a mission led by the Minister of Territorial Administration and Head of Civil Protection, Paul Atanga Nji, to the affected areas. “The Head of State has requested a thorough study of the causes of flooding and appropriate measures to be taken to curb this problem,” the official said.