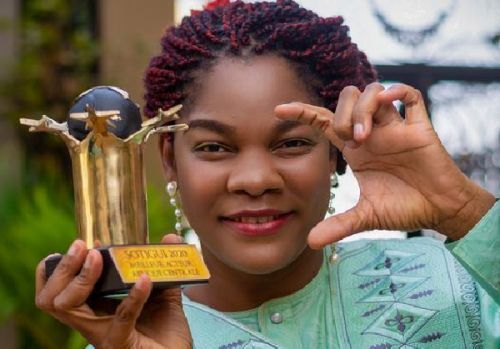 Blanche Bana recently received another award, a year after she received the “best actress award” at the Film festival in Niger in 2019, as the “best actress in Central Africa” at the Sotigui Awards (organized yearly since 2016 by Académie des Sotigui in partnership with the Pan-African TV and cinema festival of Ouagadougou-FESPACO, which honors the best actors in Africa and the diaspora). The Cameroonian actress received the award during the ceremony organized on November 12-14, 2020, in Ouagadougou, Burkina Faso.

She outrun her compatriot Virginie Ehana (Innocente) and Chadian actress Agnès Tormal (Safia) thanks to her performance in the film “Si près, si loin” produced by Gabonese producer Saturnin Ayenouet.

She thus replaces Cameroonian actor Emil Abossolo Mbo who won the award of “best actor in Central Africa” in 2019, thanks to his performance in  “Miraculous Weapons.” During the awarding ceremony, she dedicated the award to the public that has been supporting her for years now.

“I won this award thanks to you because you massively voted for me. Thanks for supporting us,” said the actress who is also shortlisted for the “Prix du public” and “Sotigui d'Or”( which is the highest award for that ceremony).

An actress, comedian, and producer, in “Si près, si loin”, Blanche Bana played the role of Matho, a young and charming woman that will try to disrupt a couple. Matho is her first role in a foreign film. In 2015, she was selected “the best Cameroonian actress” at Ecrans noirs. She performed in numerous Cameroonian films including “Monsieur L’Abbé” produced by Serge Alain Noah, “Le colis” produced by Brice Numkam, and “Immersion” produced by Frank Olivier Ndema.

Since April 4, 2020, she has been featuring in the web-series “Elle et Lui” published on Youtube.