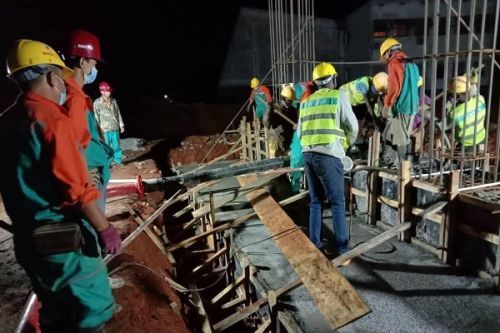 The government of Cameroon has prioritized the local workforce on the construction site of the new National Assembly headquarters. Theodore Datouo, vice president and chairman of the construction site monitoring committee told CRTV radio on July 19 that 450 workers were employed and they all live on the site. He stressed that "a Chinese company is in charge of construction while a Cameroonian company is in charge of project management.”

MP Datouo did not provide details on the deal of more than CFA56 billion between the Cameroonian government and the Chinese party on the project. "It is not a loan from China to Cameroon. The CFA56 billion released by China are fully invested in the project. The Chinese party builds the headquarters, does all the finishing, equips the buildings, and delivers it to Cameroon. For the Cameroonian side, there are counterpart funds. For example, the equipment that will be imported into Cameroon as part of the project will be exempt from customs duties,” the official said.

He estimated that work is already 60% completed. The part that has already been done includes the new hemicycle, which is a large building with four levels and a floor area of 2,400 m2. The hemicycle has 430 seats, he says. There is also "the banquet hall which is at the far east of the site with a capacity of 1,000 seats. In the basement, we have water storage (4,000 m3) for fire risks.”

The project was conceived nearly 20 years ago. But it was not until April 2021 that the work was started. According to the chairman of the monitoring committee, the construction site should be completed in 2024.