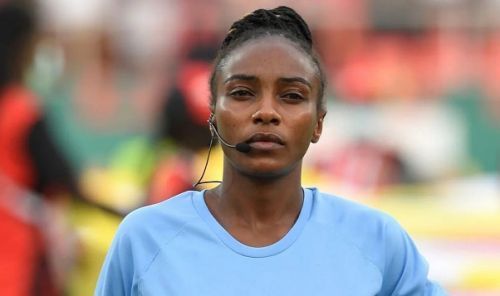 On January 18, Salima Mukansanga became the first woman to officiate an African Cup of Nations final round match in Yaoundé. The 35-year-old Rwandan officiated as a central referee in the match between Zimbabwe and Guinea (2-1) at the Ahmadou Ahidjo Stadium. She had already made history by becoming the first woman to officiate as a fourth referee (or assistant referee) during the Guinea-Malawi match (1-0) on January 10 in Bafoussam, in the West.

She officiated as a central referee at the 2018 Women's Under-17 World Cup in Uruguay and at the 2019 Women's World Cup in France. She was also among the field referees during the Olympic soccer tournament at the Tokyo Olympic Games held from July 23 to August 8, 2021 in Japan.

She was certified as a referee by the Confederation of African Football (CAF) in 2012. Before that certification, she used to officiate as an assistant referee in Rwandan men's second division matches and in women's matches.

Her career took a decisive turn in 2014.  That year, Salima Mukansanga refereed the Zambia-Tanzania match, a qualifier for the 2014 African Women's Championship. It was her first time as a central referee in an international match,

“It is because of how I handled that match that I proved my ability to lead matches at any level on the continent. It was an exciting experience. Since that day, I have been trusted to officiate countless international matches in Africa and beyond,” she told Rwandan media New Times.

She just crossed a new milestone by becoming a central referee during AFCON2021. For Eddy Maillet, CAF refereeing manager, this is a landmark moment.

"We are extremely proud of Salima because she has worked hard to be where she is today. We know that she had to overcome serious obstacles to reach this level and she deserves credit. This moment is not only for Salima but for every young girl in Africa who has a passion for soccer and sees herself as a referee in the future," he said.

Today Friday, January 21, 2022, the CAF is organizing an open house session with the Rwandan referee. This will be the opportunity for the media to discuss with the woman who just inscribed her name in gold lettering in the annals of African football.