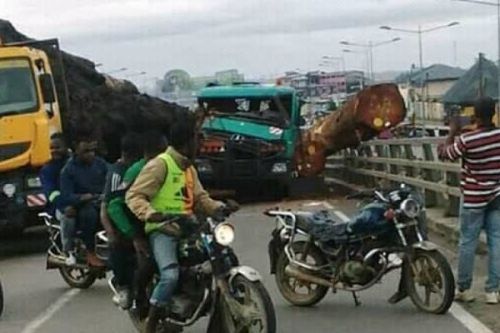 Douala: Authorities to come up with a traffic plan to reduce road accidents

Authorities in Douala are mulling over a traffic plan to improve urban mobility and reduce road accidents involving heavy goods vehicles (trucks, logging trucks, etc.) in the city. They will also create parking spaces for these vehicles. Official data showed that HGVs were involved in 39% of traffic accidents recorded in the city in 2021, killing 206 people. This is one victim every other day.

As part of this plan, the Mayor of Douala, Roger Mbassa Ndine, met with truck drivers yesterday April 20. In May 2021, the Prefect of Wouri, Benjamin Mboutou, banned heavy goods vehicles from driving on urban roads during the day, particularly on the East Road, which is the most used by trucks transporting goods to and from Chad and the Central African Republic (CAR). However, the measure has hardly been respected.

The administrative authority believes that the new traffic plan will be a game-changer since it will be developed by mutual agreement between the Douala Urban Community and truck drivers, who are accused of not respecting the norms and principles of driving in urban areas.