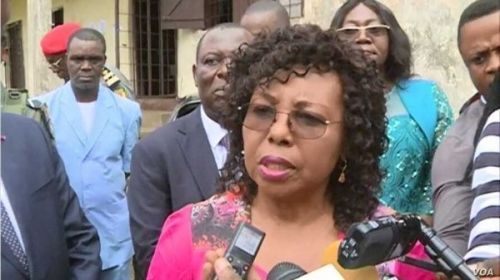 A guidance counselor at Ambam Technical High School in the southern region of Cameroon got suspended for beating a student. Aimé Valère Ebouele was temporarily suspended on September 20, pending a final decision on his case.

His suspension was instructed by the Minister of Secondary Education (Minesec), Pauline Nalova Lyonga (pictured), who also forbids him any contact with students. According to official information, the counselor hit 17-year-old Ulrich Ateba, a student in 11th grade, in the left flank during a discussion on school orientation last September 15.

Principal Benjamin Betare indicated that the now suspended counselor was “punishing the student after the latter was rude to him.” The kick was so violent that the teenager had to be taken to Ambam District Hospital where he was diagnosed with internal bleeding. He was then transferred to Ebolowa Regional Hospital for emergency surgery, where the medical team removed his damaged spleen.

Minister Pauline Nalova Lyonga took the opportunity to condemn, once again, violence in schools, deploring the fact that a teacher is the culprit. The law of April 4, 1998, on the orientation of education in Cameroon guarantees the physical integrity of students by prohibiting physical abuse and all other forms of violence. Following this incident, Minesec announced that a "national conference on violence in Cameroonian schools" would be held in December to further raise people’s awareness.