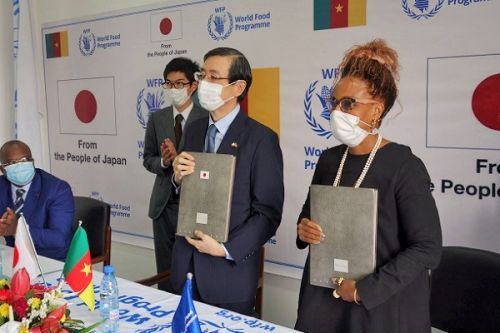 Japan grants over CFA1bln to ensure food security in Cameroon

At a time when about 5 million people need humanitarian assistance in Cameroon, the country has secured more than CFA1 billion from Japan to fight food insecurity. The resources will support the World Food Program’s activities in the country. Beneficiaries are vulnerable groups, including refugees, internally displaced persons, returnees, and host communities, as well as children under five years of age, pregnant women, nursing mothers, and people living with HIV. More than 185,000 vulnerable people in the Far North, North, Adamaoua, East, North-West, and South-West regions will also receive support.

Repeated attacks by Boko Haram in the Far North and neighboring Nigeria have led to an increase in the number of refugees and internal displacement in Cameroon. The East, Adamaoua, and North regions hosted large numbers of refugees who had fled violence in the Central African Republic (CAR). The Anglophone crisis in the Northwest and Southwest has also led to displacement and increased food insecurity in these two regions since 2017.

“Concerned about the situation of the most vulnerable, which is aggravated by COVID-19, we decided to extend our assistance through WFP to address the urgent needs of these people,” said Mr. OSAWA Tsutomu, the Japanese ambassador to Cameroon. For her part, WFP Country Director and Representative, Wanja Kaaria, praised the "generosity" of the Japanese people towards the people of Cameroon.

“As we move towards rolling out our 5-year strategic plan, partners like the Government of Japan are more than ever needed to ensure adequate provision of lifesaving and life-changing response in Cameroon,” she said. To date, Japan has granted more than CFA8.5 billion to support WFP activities in Cameroon.