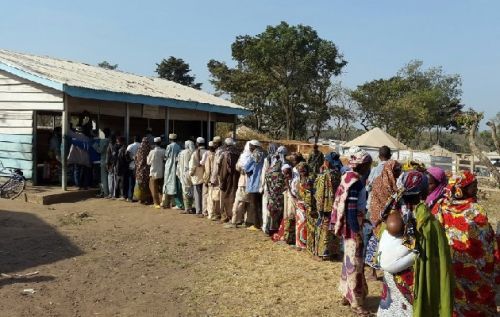 Thousands of Central Africans fleeing violence in their country come to the Gado-Badzere camp in Garoua-Boulaï (Cameroon), a town on the border with the Central African Republic (CAR) in the eastern region, every day. At least 5,000 of them have already found solace in Cameroon since tensions in CAR resumed in December, according to a statement on the website of the United Nations High Commissioner for Refugees (UNHCR). They add up to the 26,000 Central African refugees already on the site, who had fled previous violence in 2014.

Faced with this situation, teams of carpenters gathered to build 300 emergency shelters to house the new arrivals. But only a portion of them will be housed on-site, while the others will live in the communities, we learned. "For now, with the support of our partners, we can cope with these arrivals and offer shelter, food, and care to those who need it,” says Maurice Moussouravi, head of the UNHCR office in Meiganga, which manages the Gado-Badzere site. He however stressed that if arrivals should continue, resources won’t be enough to take care of them.

While the situation is still "manageable," the UN agency says additional resources will be needed to assist newcomers and to strengthen coordination and support efforts. "Resources remain limited and we will need all the goodwill we can muster to continue to assist newcomers," Mr. Moussouravi said. According to the UNHCR, Cameroon hosts more than 400,000 Central African refugees, including more than 193,000 in the eastern part of the country.

The UNHCR resumed its voluntary repatriation operations for Central African refugees last November, after an interruption in March due to the coronavirus (Covid-19) pandemic. This enabled 1,499 Central African refugees to return home "in safety and dignity through eight convoys," said Wahid Ben Amor, head of the UNHCR sub-delegation in Bertoua, in an interview with Cameroon tribune. But the violence of recent weeks in CAR has stalled operations. Cameroonian authorities have been exercising permanent monitoring since the deterioration of the socio-political and security situation in CAR, a country with which Cameroon shares a border of nearly 800 km.

"The number of refugees is increasing significantly every day. There are high-ranking Central African personalities who have come to settle for security reasons. We came here to reassure the population and strengthen our security system," Gregory Mvongo, Governor of the East, recently said during a visit to Garoua-Boulai.

At least 117 soldiers found refuge in this border town on December 23, after a rebel offensive in northwestern CAR. They are housed in a military camp, awaiting their return to their country once the security situation has improved.